By Mechanicalinventors February 20, 2017
What is Pareto Analysis?

Pareto analysis is a statistical technique used to define the most effective parameters from many parameters. Pareto analysis is also known as 80/20 rule because a majority of the problems (80%) are due to significant causes (20%). Pareto analysis was suggested by American Engineer and management consultant Joseph M. Juran (Romanian by birth), he named it after Italian economist Vilfredo Pareto, who observed that 80% of total income in Italy was with 20% of the population. Pareto analysed this in some other countries and found the same.

How to make Pareto Analysis?

Requirements: Data which you want to analyse

1.    Collect the causes and occurrence of causes.

3.    Now calculate cumulative causes for each cause (example shown in template file)

4.    Now calculate the cumulative percentages of each cause in descending order.

5.    Create a bar chart (vertical) with causes on x-axis and number of occurrences on the y-axis.

7.    Plot the cumulative count of percentage of each cause on x-axis.

9.    Draw a straight line from 80% to the point until it intersect the curve. After that draw another straight line from that intersection point to x-axis.
10.  Point on x-axis defines the major causes (left side) according to 80/20 and the causes on the right side are minor.

Our analysis is competed, based upon above analysis we should focus on the causes which are identified as major causes. 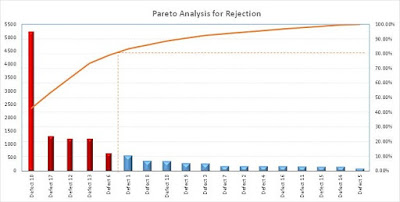 If you have any question regarding this article you can comment below or you can contact us on mechanicalinventors@gmail.com